Russian President thanks Japan PM for invitation to APEC summit

November 04, 2010 (KATAKAMI / KREMLIN.RU) — President Dmitry Medvedev sent a response message to Prime Minister of Japan Naoto Kan thanking him for the invitation to take part in the 18th APEC Economic Leaders’ Meeting in Yokohama on November 13–14, 2010.

“I fully share the belief in APEC’s importance in expanding multilateral political and economic cooperation in the Asia-Pacific region as part of the effort to find effective responses to modern challenges.

I intend to actively participate in discussions on the main theme of Japan’s presidency, Change and Action. I hope that the forum will prompt its participants to adopt a set of joint measures to overcome the effects of the global financial crisis and to develop an optimal model of APEC region’s development in the post-crisis period with an emphasis on economic and social security.

I am confident that the summit will make a tangible contribution to sustainable growth of the economies participating in the forum.”

Japanese Prime Minister Naoto Kan extended deep condolences over consecutive natural disasters which had hit Indonesia in the past few weeks, thus causing a big number of casualties on the people. (Photo by JIJI PRESS/AFP/Getty Images)

Indonesia, this month, was already hit by three devastating disasters of Wasior flash flood in West Papua, followed by an earthquake-triggered tsunami in Mentawai district, West Sumatra, then volcanic eruption in less than 24 hours in Central Java.

“I really feel sad when hearing many victims were killed and many of residents in the affected areas are in a state of difficulty resulting from quake happening on October 25, in Mentawai and eruption of Mount Merapi in Central Java which had been started on October 26, a release from the Japanese embassy made available to ANTARA said here on Thursday.

The Japanese Prime Minister also said his country was available to provide such maximal aid to the families of the disaster.

In addition, Australia was reported to provide up to $1 million of emergency assistance to help Indonesia in the wake of two devastating disasters, according to the Australian Embassy here in its wesite on Thursday.

Australia regretted the loss of life and damaged caused by the tsunami and earthquake in Mentawai and the volcanic eruption on Mount Merapi.

“Australia is always keen to assist Indonesia in times of need. We are working with our Indonesian counterparts to quickly and precisely respond to these disasters,” Robilliard said.

Australia`s initial support package will consist of funding to SurdAid for assessment, relief and recovery activities to the Mentawai Islands, the Indonesian community organisations Nahdlatul Ulama and Muhammadiyah to help local communities recover following the eruption, and the Indonesian Red Cross for humanitarian assistance in the Mentawai Islands and Mount Merapi area.

On 26 October 2010 Indonesia reported that a 7.2 magnitude earthquake struck the Mentawai Islands, shortly followed by a tsunami. On the next day, a volcanic eruption on Mount Merapi occurred near Yogyakarta. These disasters caused a number of deaths and injuries. 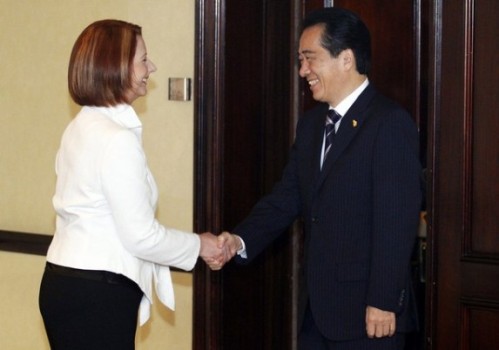 Japan’s Prime Minister Naoto Kan (R) shakes hands with Australia’s Prime Minister Julia Gillard during a bilateral meeting preceding a Asia-Europe Meeting (ASEM) in Brussels October 4, 2010. European and Asian leaders will try to narrow differences over representation on the IMF at talks intended to break down barriers between countries representing more than half the world’s population.  (Getty Images)

Japan’s Prime Minister Naoto Kan (R) shakes hands with Australia’s Prime Minister Julia Gillard during a bilateral meeting preceding a Asia-Europe Meeting (ASEM) in Brussels October 4, 2010. European and Asian leaders will try to narrow differences over representation on the IMF at talks intended to break down barriers between countries representing more than half the world’s population. (Getty Images)

Japan’s Prime Minister Naoto Kan (R) shakes hands with Australia’s Prime Minister Julia Gillard during a bilateral meeting preceding a Asia-Europe Meeting (ASEM) in Brussels October 4, 2010. European and Asian leaders will try to narrow differences over representation on the IMF at talks intended to break down barriers between countries representing more than half the world’s population.  (Getty Images)

John Roos, U.S. ambassador to Japan, left, shakes hands with Japanese Prime Minister Naoto Kan prior to their talks at Kan’s office in Tokyo on Tuesday, June 22, 2010. On Monday, Kan said he will reassure U.S. President Barack Obama when they meet at a summit this weekend that Japan-U.S. ties continue to be “the cornerstone” of Japan’s diplomacy.

John Roos (L), US Ambassador to Japan shakes hands with Japanese Prime Minister Naoto Kan (R) prior to their talks at Kan’s office in Tokyo on June 22, 2010. Kan is expecting to have bilateral meeting with US President Barack Obama at the G8 summit meeting in Canada later this week.

John Roos (L), US Ambassador to Japan, shares smiles with Japanese Prime Minister Naoto Kan (R) during their talks at Kan’s office in Tokyo on June 22, 2010. Kan is expecting to have bilateral meeting with US President Barack Obama at the G8 summit meeting in Canada later this week.

Mr Kan was speaking before being sworn in to office by Emperor Akihito.

His appointment on Friday followed the abrupt resignation of Yukio Hatoyama.

Mr Kan earlier named his new cabinet, keeping 11 of the 17 ministers in place and appointing his former deputy Yoshihiko Noda as finance minister.

Mr Hatoyama stepped down last week, amid tensions over a controversial US military base on the island of Okinawa.

Mr Kan, the former finance minister, has assured President Barack Obama that he will relocate the base to the north of the island as agreed, despite anger from locals who want it moved off Okinawa entirely.

Despite the unpopular move, Mr Kan enjoys poll ratings above 60% as his Democratic Party (DPJ) faces an election for the upper house next month.

In his televised remarks, Mr Kan said he wanted to “rehabilitate Japan drastically and create a vigorous country”.

He said the national debt – the largest debt of the industrialised world, at nearly twice the country’s economic output – should be “handled as the country’s biggest topic”.

“Rebuilding financial health is essential for Japan’s economy,” he said.

Mr Kan also pledged to restore the relationship with Washington, saying the Japan-US security alliance was the “cornerstone” of Tokyo’s politics.

He said he would honour the agreement reached with the US over the future of the the Futenma base on Okinawa, while seeking to “ease the burden for the people of Okinawa”.

Earlier on Tuesday, Mr Kan unveiled his new cabinet, which will be sworn in alongside him later.

As had been widely expected, he retained many top ministers, including Foreign Minister Katsuya Okada and Defence Minister Toshimi Kitazawa.

Among the new faces in the cabinet is Renho, a popular television presenter who goes by one name.

The 42-year-old, known for her tough questioning of bureaucrats in debates over public spending, has been appointed minister of administrative reform.

Announcing the appointments, Yoshito Sengoku, the new chief cabinet secretary, said the ministers were “young, fresh and enthusiastic about their jobs”.

“Prime Minister Kan has appointed the ministers mindful of the need to form a government with professionalism, very clean politics and ability to govern,” he said.

Later in the day, the ministers will don ceremonial tuxedos and go to the Imperial Palace in central Tokyo to be formally sworn in.

Japanese newspapers have welcomed the “son of a salary man” to the post of prime minister, contrasting his ordinary background to the privileged roots of recent prime ministers.

He announced that Yukio Edano would take over as secretary general of the party, replacing the powerful Ichiro Ozawa, who stepped down last week.

Shinji Tarutoko, who challenged Mr Kan for the leadership, was named the DPJ’s parliamentary affairs chief.

(VOA) Japan is welcoming two-time cabinet minister Naoto Kan as its fifth prime minister in four years. The lower house of Parliament, controlled by the Democratic Party of Japan, elected the newly installed party leader to succeed the unpopular Yukio Hatoyama, whose government was dissolved earlier in the day.

Japan quickly scrambled to put a new government into place following the collapse of the Hatoyama cabinet, which lasted less than nine months.

Mr. Kan, the incumbent finance minister, moved to the top spot as the Democratic Party of Japan’s candidate.

The Lower House of Parliament announced that Mr. Kan received 313 votes compared to his closest challenger, Sadakazu Tanigaki, the president of the opposition Liberal Democrats, who received 116 ballots.

The new prime minister, before the parliamentary voting, briefly addressed his fellow party lawmakers after they selected him as the DPJ’s president.

Mr. Kan says with the help of all of the DPJ lawmakers he wants to put together firm policies to rebuild Japan ahead of next month’s upper house election.

That will be the first big challenge for the 63-year-old new leader. Most analysts are predicting a resounding rebuke from the electorate that would see the Democrats lose control of the less powerful chamber.

Mr. Kan will also have to try to repair Japan’s diplomatic standing, especially the relationship with its closest ally, the United States. He will make his debut on the world stage at an important leaders’ summit in Canada in four weeks.

Mr. Hatoyama’s ambiguity concerning the future of U.S. military bases on the southern Japanese island of Okinawa is generally blamed for his downfall.

During his political ascent, Mr. Kan, a reformer in many areas, has been cryptic about his foreign policy views, including the long-standing defense pact with Washington. He has spoken of a more balanced defense relationship. Analysts predict that as another likely short-time prime minister Mr. Kan may try to avoid getting too involved in the Okinawa base issue, which bedeviled his predecessor.

Mr. Kan says, however, he will stick to most of the policy initiatives pursued by his predecessor, including the formation of an East Asian community, along the lines of the European Union.

Mr. Kan, a popular figure for taking on bureaucrats during a stint as health minister in the mid-1990’s, is a break from the past. His four short-term predecessors all came from family dynasties rooted in the  Liberal Democratic Party, which as the moderate-to-conservative political force, governed Japan for nearly all of post-Second World War era.

The new prime minister, characterized as a short-tempered populist, has more humble roots as the son of a factory manager. A physics student in college, Mr. Kan became a civic activist, stressing environmental and feminist causes. His political career was launched when he won a parliamentary seat as a member of a small opposition party on his fourth attempt.

As is the case with many prominent Japanese politicians, Mr. Kan has recovered from scandals, including those about his personal finances and one involving an extra-marital relationship.