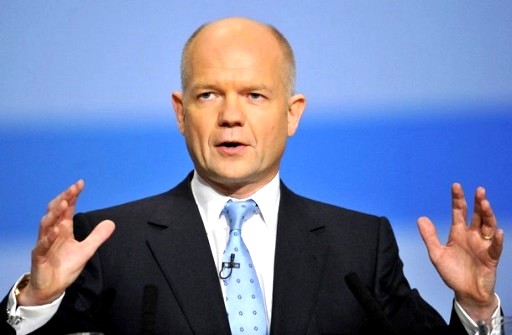 British Foreign Secretary William Hague, who is scheduled to arrive in Israel on Tuesday evening, will hold a secret roundtable discussion on the Iranian nuclear program on Wednesday morning with a long list of senior Israeli officials involved in this issue.

This is Hague’s first visit to Israel since being appointed foreign secretary in the recently elected Tory government, and the roundtable discussion is being held at his request. His goal is both to gain an in-depth understanding of the Israeli government’s positions on this issue and to hear assessments of Iran’s nuclear program firsthand from senior Israeli defense and intelligence officials.

The closed meeting is scheduled to take place at the British ambassador’s residence in Ramat Gan, and those invited include Mossad chief Meir Dagan and the director general of the Israel Atomic Energy Commission, Shaul Chorev. Other Israelis on the guest list include Deputy Foreign Minister Daniel Ayalon, Intelligence and Atomic Energy Minister Dan Meridor and Strategic Affairs Minister Moshe Ya’alon.

But it seems that at least some of the ministers will skip the roundtable, because it apparently will conflict with a cabinet meeting.

The British embassy said Britain shares Israel’s concern about the threat posed by nuclear weapons in Iran’s hands and holds regular discussions with Israel about this issue, but cannot at this stage discuss the details of the secretary’s schedule for the visit.

Britain and France have spearheaded the battle against Iran’s nuclear program in the European Union. After the UN Security Council approved a fourth round of sanctions against Tehran in June, London and Paris worked hard to get the EU to approve additional sanctions of its own against Iran, which it did in late July.

Israel and Britain cooperate very closely on Iran in both the intelligence and the diplomatic spheres. This cooperation is particularly noteworthy given the two countries’ deep differences on the Palestinian issue.

And Britain’s new ambassador to Israel, Matthew Gould, is an expert on the Iranian nuclear issue. He dealt with it both when he served as deputy head of mission in Britain’s embassy in Tehran a few years back and in his most recent post before coming to Israel, as principal private secretary to then-foreign secretary David Miliband.

One thing Hague will be looking for at Wednesday’s roundtable is Israel’s assessment of how effective the new sanctions against Iran have been.

Two weeks ago, Ayalon and a group of senior Israeli intelligence and defense officials were in Washington for a strategic dialogue that dealt solely with the Iranian issue. At that meeting, the Americans opined that the sanctions had succeeded beyond their expectations, thanks to widespread cooperation by many countries worldwide.

The Israelis agreed that the sanctions had been more effective than anticipated and were causing economic hardship in Iran that had increased political pressure on its government.

Nevertheless, the Israelis stressed, there is no evidence so far that the sanctions are causing Tehran to rethink its nuclear program, and they certainly have not caused it to stop enriching uranium. That is undoubtedly the assessment they will repeat to Hague tomorrow.